Not too long after its initial release, Bosch is treating riders of the Performance Line CX Gen 4 system to a significant software update. Increased torque, a refined eMTB mode and new feature called Extended Boost all work towards the goal of delivering the most natural riding experience possible.

Due to the multiple sensors within the system, Bosch is now able to tune the riding characteristics by combining measurements from torque and cadence. After the successful initial launch and collecting info from real-world performance over a wide field of users, they have entered the stage to fine-tune their entire system and make it available to the public as soon as they’ve achieved the results they were looking for.

Starting with torque, Bosch is increasing the maximum torque from 75Nm to 85Nm in both eMTB and Turbo modes. This extra power will be especially noticeable at lower cadences, but really can be felt over a broad cadence range – with the usable range having been extended in both lower and higher directions. Riders will particularly benefit in technical sections with more readily available power to rely on, delivered in a controlled, jolt-free and natural motion.

Out in the field, the added power therefore helps sporty pilots as much as more leisurely-oriented riders, whether you generally prefer spinning your heart out or cranking your pedals at lower RPMs. “This enables unpredictable riding situations to be mastered even more effectively,” explains Claus Fleischer, CEO of Bosch eBike Systems. “Delayed gear shifting, for example, is better compensated and acceleration out of tight turns is much more powerful and dynamic.”

With a finer start-up behaviour and more sensitivity in low gears as well as a more dynamic and natural support over an extended range of cadences, the refined eMTB mode has been adapted to the increased torque while delivering an even more rounded overall feel.

Extended Boost is a new motor behaviour embedded within the eMTB mode. It helps riders conquer challenging technical sections like exposed roots, natural steps and rocks by delivering a slightly elongated dynamic push when a specific kind of explosive pedal pressure asks for it. One of the driving people behind the idea was Stefan Schlie, one of Bosch’s ambassadors and development riders with a background in trials, who also helped with the development of the first version of the eMTB mode. Therefore, it’s not surprising that Extended Boost comes in handy in highly technical riding situations, especially at lower speeds.

The software update will be installable by specialist retailers starting this summer, and is available for all e-bikes with model year 2020 Performance Line CX motors and onwards. Maximum torque can also be increased to 85Nm for the Cargo Line, Cargo Line Speed and Performance Line Speed drive systems. The software update itself is free, but it’s open to the retailers to ask for a service fee for installing the new update.

Beyond those updates, the Kiox display is also getting a software update in summer of 2020. With the help of the smartphone app, you’ll be able to display simplified navigation pointers on your Kiox display. Also worth mentioning is a more stable Bluetooth connection. Connectivity between your different digital devices is also improved.

The larger Nyon display has been completely reworked into a more compact design with touchscreen technology, multiple individualization options and can be retrofitted in the future.

To celebrate its ten-year anniversary of e-bike involvement, Bosch is also launching some special edition anniversary models with Cube, Cannondale and Moustache, that have won an internal design contest with their ideas.
Ride Impressions

After an initial lap around my home trails with Bosch’s development rider Stefan Schlie, I had the chance to keep the test bike equipped with an early version of the software update (not the final one that will be released) to get a better idea about the differences to the original software. The choice of test bike couldn’t have been better, as I had been riding a nearly identical Trek Rail for quite a while.

Bosch’s latest generation of Performance Line CX motors already felt plenty powerful, but I definitely won’t say no to an extra helping of power. The extra 10Nm of torque can especially be felt when accelerating in higher gears, compensating for delayed gear shifting, when being surprised by a sudden incline, or simply when accelerating out of a tight corner, although I’d go as far as saying that it can be helpful in any given situation at any time.

At the same time, thanks to Bosch’s excellent motor management, transitions are smooth as ever, or, due to the refined eMTB mode, possibly even more refined than before. I’ve heard some people complaining that the Gen 4’s eMTB mode was dishing out a bit too much power and therefore having lost some of the sensitivity compared to its predecessor’s setup, so maybe the update might be the fix they are looking for.

Personally, I never had an issue with it, although it’s clear that the instantaneous power delivery compared to the older Performance CX motor is highly noticeable in any mode. On the other hand, the system is incredibly sensitive to varying pressure from the pedals and you can control the output to the wheel predictably in eMTB mode. Wheel spin is still a factor. of course, but if you want to minimize it, just refrain from mashing the pedals like a madman. How much the refined setup of the 2.0 software update has helped in that regard is hard to quantify, not having had the time to do a thorough side-by-side comparison between the software versions.

On the trail, it didn’t matter how steep or rugged the terrain seemed to be; you hardly had to think about the motor’s capabilities. It’s even rather easy to push through sections where the front wheel runs into a larger rock, and I found myself tackling steeper sections in a higher gear than usual to avoid wheelspin, with the bike just propelling you along nicely. Also, when intentionally shifting into higher gears at lower speeds for testing purposes it showed that the bike is now quite capable of gradually accelerating towards higher speeds without feeling like a slug.

On my test bike, you could feel a slight initial tug in Turbo mode when the motor kicks in from resting the pedals, something that almost disappears in eMTB and the lower ride modes. Unfortunately, the updates can’t fix the metallic clacking noise when the engine is unloaded and rolling over uneven ground, not unlike that of bad chain slap, but that’s a different topic. According to Schlie, he didn’t notice a significant change in battery consumption with the new update over the past months of testing. 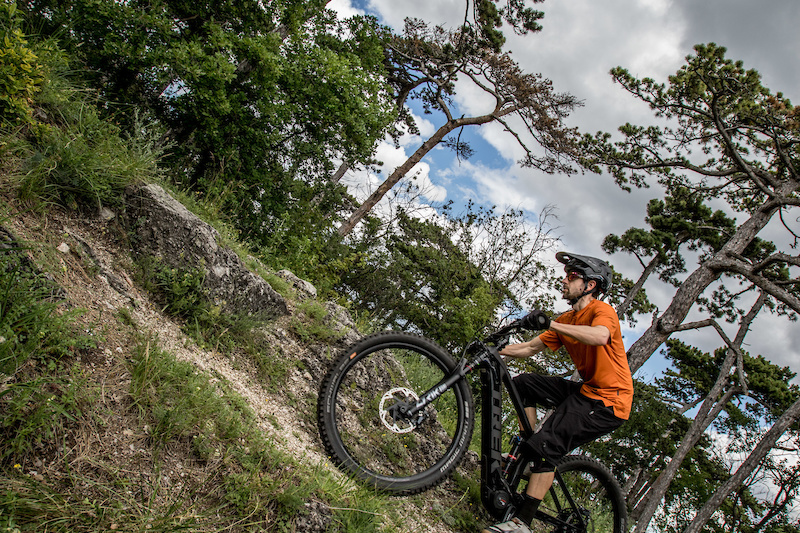 Personally, I am most excited about Extended Boost from Bosch’s list of enhancements. It might not seem like much of an add-on, but if you’re someone that loves to ride up and along gnarly technical trails with ridiculous obstacles, as much as going down them, Extended Boost is making your life considerably easier. Generally speaking, by giving the pedals a quick punch, the motor quickly accelerates according to the input and gives the bike an extra push once the pedals stop turning, to propel you over obstacles until the rear wheel clears them. Especially in sections where you need to lift your front and rear wheel up and over ledges – something that can be a bit of a chore on e-bikes – the motion now becomes fluid and you’re less likely to get stuck when you can’t keep pedaling or if the cranks shouldn’t clearing the obstacle during a full rotation.

Extended Boost comes in handy when you want or have to execute a drop without much, or any run-in. Without having to pedal until the rear wheel clears the ledge, chances are that you’ll be much more composed during the flight phase of your drop without the nose of your bike dropping off in case you shouldn’t time the entire motion perfectly. Half a pedal turn is enough to get you safely down a regular or rolling drop off. Also, when rocking the pedals in balancing situations there’s instant forward motion to keep pushing the bike ahead, without lag or any other jitter.

Maybe Bosch’s update doesn’t represent a new gimmick that you can turn around in your hands or inspect on your bike, but it certainly is an improvement for any existing or future customer of the Performance CX system. Once you get used to it you won’t even think about it anymore, but I bet you’d miss it if you had to revert back to the older software version.

Power is nothing without control and Bosch impressively demonstrates their understanding of what a rider might be looking for in terms of performance and handling. With Extended Boost, 85Nm of torque and a refined eMTB mode, an already great motor system is getting even better.