Splat! My daughter leaves no uncertainties over the breakfast I just made her as the first bits of oatmeal come flying through our kitchen. I ponder the insane sticking ability of dried oatmeal and the many places it is now spread over our kitchen. Forget about foam tire inserts, maybe I should just put oatmeal in there? It seems impenetrable. No time to solve that riddle, our day has already skipped past me and I ́m already jumping through hoops to catch up with it.

Later that day I’m at work when a friend texts me and asks me if I want to go for an evening ride. I ́m dying to go but this would mean being away from home for at least 2-3 hours which on this day really isn’t ́t possible.

Having a kid quickly made me realize that if I intend to ride my bike often, riding needs to be close. I have to bring the riding to me instead of spending time transporting myself to trail heads. Not less relevant these days with an ongoing pandemic with its restrictions and social distancing.
With this in mind, I went out on a scouting mission in the immediate area around my village.

What I didn’t ́t find was 500m of vertical drop with loamy terrain, possibilities of big jumps, steep tech sections and a mint 1969 Ford F100 pickup truck to shuttle me up and down. In other words, the spot of my dreams. Instead, I found a hill with 10 m of vertical drop consisting of rocky terrain and my old Volvo still parked in the driveway. But it was less than 5 minutes from my house. With a shovel in hand, I began a slow attempt at building a little trail that is compatible with everyday life.

Coming home from work I stuff some snacks in my backpack and manoeuvre my daughter into her rowdy outside clothes. We walk to my trail which is now 100 m long with 8 turns, one tiny gap jump and some narrow rock drops. It really is nothing impressive but it ́s really fun to ride. 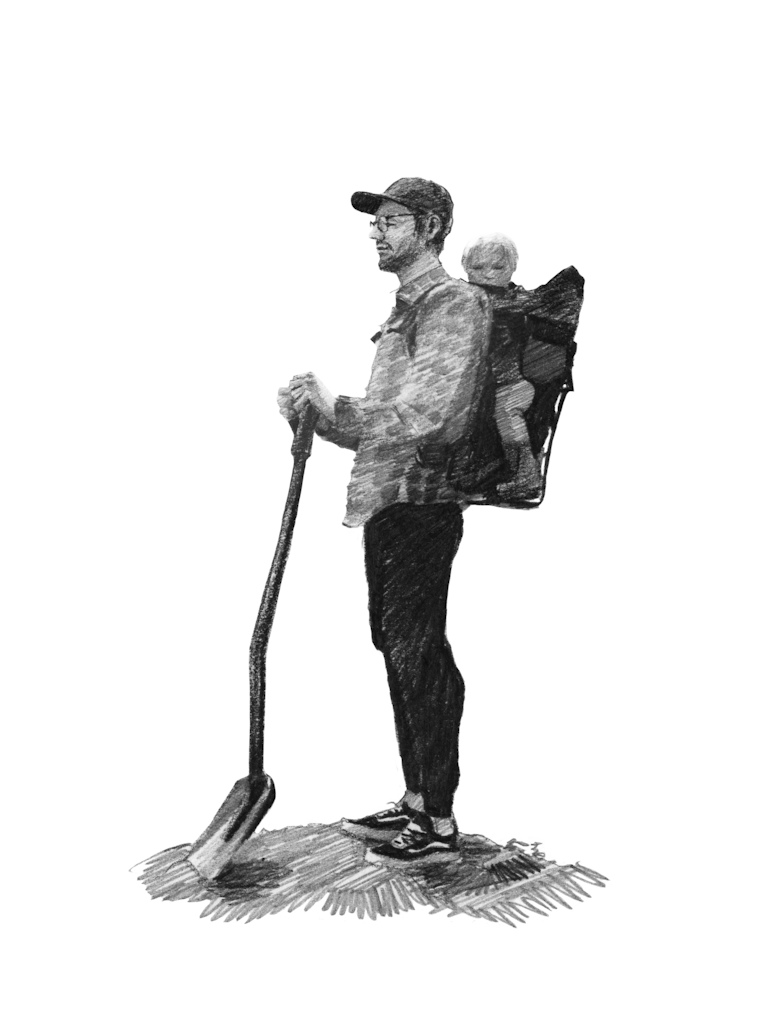 Work is heavier with a kid on your back but the constant commentary is priceless.

We set out to work on a shark-fin-type jump, me with a shovel and my daughter with her plastic spade and bucket. I can ́t help but smile as her imagination quickly carries her from the present and into that world we all visited as kids. She ends up taking away most of the dirt I´ve just put there but I don ́t mind. It ́s a really great moment. Looking back up the trail I realize that we ́ve basically built this trail together. Many times with her sleeping in her pram or just hanging along in a backpack carrier.
Suddenly I ́m yanked from this thought as I realize that half an hour has passed and my kid needs a refuel. Her face is grimy with dirt and the plastic spade has lost all of it ́s charm.
We stop for a snack before we go home. Sitting on a fallen tree she is murdering a piece of fruit, laughing at ants as the sun sits low behind the treetops. Bedtime is quickly coming up and it ́s time to go home.
Putting her to sleep guilt washes over me. Dragging my kid into the woods to work on something that ́s made for my own amusement. Shouldn’t we be at some designated playground with facilities made just for her? I feel completely selfish and the scale of parental conscience is tipping completely the wrong way. I feel like the worst parent ever.
I go back to the trail in the evening, this time alone and I manage to finish the feature we worked on a few hours before. The first few runs are a little shaky but it works really well in the end.

I sit down by the trailside and look at what we ́ve created together. Slowly that nagging guilt from before transforms into thankfulness.

This little trail enables me to spend more time at home and still keep my wits about me by allowing me to ride my bike every now and then. It ́s also pretty neat how this was just a few vertical meters of hill a while back, now a winding little trail with jumps and turns. Features that are shaped from the variations in the hill they stand on and hopefully soon shared with other riders.

Bringing my kid along to play while I work on this project is also a perfect opportunity for her to explore her own creativity in an environment that isn’t prefabricated. A rare thing in a world that ́s becoming increasingly modeled and structured according to set standards. At the end of the day, I got a chance to spend time with my daughter outside in the woods, showing her a tiny piece of the many possibilities it harbors. All of them ready to be discovered with some grit and imagination.
I can ́t think of anything else I would rather share with my kid.-

Round Up: 20 Custom EWS Bikes
Enduro Fantasy Trivia Round 1 Winner Announced + Answers to All 14 Questions
Comment